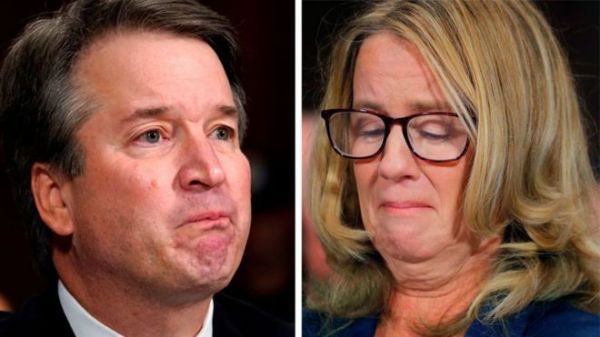 If you did not watch the live BBC Senate Judiciary Committee hearing into the SCOTUS nomination of Brett Kavanaugh and the rape attempt evidence from Christine Blasey Ford, or some of it anyway it did go on, you missed one of the political events of this decade. Its probably on catch up.

It gripped the American public and we are told they are more split than ever. I felt split myself and reduced to examining motives qui bono? Ford had nothing to gain and much she has already lost whereas Kavanaugh has a huge amount to gain and now to his evident shock – everything to lose.

With my internal dialogue revolving around my own prejudices, which favoured Ford, I settled on the above reason for continuing to accept her veracity. The democrats neither initiated, paid for or planned this it seems to me, despite the howls of outrage from the usual suspects especially Kavanaugh himself and Trump – of course – that hare does not run. But it will among the republican base, at this stage with the mid-terms coming up they will be happy enough with that. However their standing especially among women is damaged, they may well suffer as a consequence, and we are yet to have the full senate vote. I anticipate the committee vote will go soon as Chairman Chuck Grassley always planned.

Kavanaugh and Trump Coiled Together

Oh the wonder of constitutional workings over the big sea. The grinding approval process for a new nominee for SCOTUS (Supreme Court Of The US) is disrupted by this last second challenge bouncing up from 36 years ago by Professor and research psychologist Dr Christine Ford. There looks like being public hearings next week which will engage a fair few women voters of the ‘metoo’ campaign keenly following her grilling by the older male republicans on the committee. And their treatment of Kavanaugh who in a real sense is a proxy for Trump.

She is the now identified woman accusing Supreme Court nominee Brett Kavanaugh of sexual assault and came forward with her explosive allegations on Sunday. She said according to Fox news the supposed attack “derailed me substantially for four or five years” and claims that the episode rendered her “unable to have healthy relationships with men.” She speaks through her female lawyer which is all well and good, but is she able to be such an attack dog as Attorney Michael Avenatti who stoutly defends ‘Stormy’ Daniels who had the affair with Trump he tried to hush up through lawyer Michael Cohen.

My my how it coils around; for my money Avenatti is one to watch. He may try a run for president himself come 2020.

The latest sticky shit to hit the fan is Bob Woodward’s book ‘Fear’ about what gives inside the WH, and comes on top of the NYT op-ed by an anonymous ‘senior advisor’ inside that plagued place.

Woodward is quite profound in an interview when he quotes his old boss and editor of the Washington Post back in his Watergate revelation days. Bill Bradlee he recalls said “The truth emerges”. All the Trumpian bluster and lies will not prevent this remorseless reality overtaking him. More and more evidence keeps emerging from multiple sources and perspectives until the picture they paint is undeniable.

His cruel brutality is being broken down day by day, and putting his own naked self-interest over the national interest is steadily revealing him for the monster he truthfully is.

Coiling back to Russia

A few weeks back there was surprise at one of Trump’s twitter attacks on a relatively unknown Department of Justice official, Bruce Ohr – Why? Why him?

As the facts unravel we learn in court evidence of the criminal payments facilitated by Samuel Patten (a close associate of Paul Manafort) and also that he lied to a congressional intelligence committee investigating Russia links. The interesting detail here is that this committee has referred him and other witnesses they suspect of dishonesty to them to the FBI and Mueller investigation.  Among them are Donald Trump junior and son-in-law Jared Kushner. If any of them are found to have lied that is a criminal offence.

The New York Times reports Justice Dept. official Bruce Ohr worked with the FBI to try to turn Russian oligarchs into informants and focused on Oleg Deripaska an intimate of Vladimir Putin (known as Putin’s oligarch). Former U.S. Attorney Barbara McQuade says it may explain President Trump’s recent criticism of Ohr. We now know Ohr was close pals with our Brit and former MI6 agent Christopher Steele, originator of a dossier of evidence and claims. Oh yes, and Ohr has been giving witness statements to the Mueller team from a few weeks ago…around when Trump started attacking him by name… some coincidence.

A picture is worth a thousand words

While writing about psychedelics and their effects I feel the infinite regress merging into the Cosmic Joke and being in some sense outside rational and logical understanding. What sense?

So a slight detour as I discover that the aforesaid Daniel Dennett (a well recognised expert on conciousness) has collaborated with an undergrad who asked him for supervision with a thesis on humour and they brought a book into being with another Prof.

Dennett found Hurley’s resulting thesis so promising that he suggested trying to get it published. In the end, the student and his two professors collaborated on the book Inside Jokes: Using Humor to Reverse-Engineer the Mind (MIT Press, 2011).

The authors detail the multitudinous theories that have been offered over the centuries for how humor—or mirth as it’s called by academics—works. But most of those theories skirt the question that most intrigued Hurley, now a Ph.D. student atIndianaUniversity.

“Why is there funny at all? I think that’s the most important question we asked,” Dennett says.

A lawyer was approached by Mephistopheles, who offered him a brilliant career as a defense attorney, leading to a seat on the Supreme Court and a Hollywood movie biopic—in exchange for the souls of his wife and three children. The lawyer thought and thought, sweat pouring off his brow. Finally, he looked up at Mephistopheles and said, “There’s a catch, right?”

Human beings are anticipation machines: we’re always making assumptions about what’s coming next, usually based on very limited information. “Evolution gave us minds that tend to statistically fill in the blanks a lot—to make quick and dirty guesses as to what’s going on around us, using experience as our guide,” says Hurley, whose doctoral study is in cognition and emotion. Most of the time our minds do that work well, he notes, coming up with correct, or at least good enough, answers.

But occasionally we’re just plain wrong. Hurley says that’s where mirth plays a key role. The pleasure that a joke can bring motivates us to double-check our thoughts and ferret out our mistakes. “It’s important to survival, and the only way it gets done is if it’s fun,” Dennett says. “That’s the brain’s way, Mother Nature’s way, of getting us to do what it wants us to do.”

A senior citizen is driving on the highway. His wife calls him on his cell phone and in a worried voice says, “Herman, be careful! I just heard on the radio that there is a madman driving the wrong way on Route 280!”

Herman says, “Not just one, there are hundreds!”

We catch the error—we’d been expecting one thing, and when another pops up instead, it strikes us as funny.

Yet our brains, say Hurley and Dennett, have to perform many functions—and looking for incongruities is just one. So while the main purpose of humor is to help us survive, the enjoyment it provides has taken on a broader significance in our lives. “In the same way that chocolate cake is a supernormal stimulus for a sweet tooth—nothing that nature intended—so humor is chocolate cake for the funny bone,” Dennett says.

Texan: “Where are you from?”

Harvard grad: “I come from a place where we do not end our sentences with prepositions.”

Texan: “Okay—where are you from, jackass?”

The evolutionary theory of humor isn’t exactly easy to prove, but Hurley says the “cognitive-mechanical details” of it can be put to the test by psychology researchers. Neuroscientists have been studying brain activation in humorous circumstances, he notes, and they’ve also been “finding support for the probably-not-too-controversial idea of reward system activation,” one of the mechanisms by which the authors say humor works.

I was wondering why the Frisbee was getting bigger, and then it hit me.

Humor isn’t just about having a good yuk at our own expense, or someone else’s. It’s a vital social skill, Dennett says.

For example, this summer, when Herman Cain was still in the Republican presidential primary, he addressed a large gathering of conservatives, winning them over easily with jokes told with the timing of a stand-up comic. But when Mitt Romney came on stage next, his jokes fell flat; it was clear that his connection with the audience was weak at best.

Ad in a newspaper: “Illiterate? Write today for free help.”

Another interesting point is that we seem to be the only species with a sense of humor. Our close relatives, the bonobos and chimpanzees, apparently appreciate fun, but it looks very different from humor. Again, Dennett says, that fits with the evolutionary role of humor: it’s an attribute that would have evolved as humans evolved.

There is, of course, an occupational hazard of studying humor: you lose your sense of it. It’s what’s called being “joke blind,” like eating so many sweet things that you can’t tell what’s sweet anymore.

A hole has been found in the nudist camp wall. The police are looking into it.

Nevertheless, Hurley says he himself is as full of mirth as ever. All the analyzing “killed many a joke,” he says, “but new humorous things happen every day, and I think I’m still as sensitive to them as I always was.”

Terrible risk it seems to me, losing your sense of humour would be like losing a major line of defence in a crazy world, it doesn’t seem to happen. In fact I begin to believe by thinking about it you become more sensitised, absurdity is everywhere, humour follows.