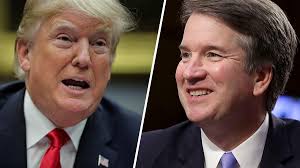 Kavanaugh and Trump Coiled Together

Oh the wonder of constitutional workings over the big sea. The grinding approval process for a new nominee for SCOTUS (Supreme Court Of The US) is disrupted by this last second challenge bouncing up from 36 years ago by Professor and research psychologist Dr Christine Ford. There looks like being public hearings next week which will engage a fair few women voters of the ‘metoo’ campaign keenly following her grilling by the older male republicans on the committee. And their treatment of Kavanaugh who in a real sense is a proxy for Trump.

She is the now identified woman accusing Supreme Court nominee Brett Kavanaugh of sexual assault and came forward with her explosive allegations on Sunday. She said according to Fox news the supposed attack “derailed me substantially for four or five years” and claims that the episode rendered her “unable to have healthy relationships with men.” She speaks through her female lawyer which is all well and good, but is she able to be such an attack dog as Attorney Michael Avenatti who stoutly defends ‘Stormy’ Daniels who had the affair with Trump he tried to hush up through lawyer Michael Cohen.

My my how it coils around; for my money Avenatti is one to watch. He may try a run for president himself come 2020.